“After 20 years of stomach pain Donna found relief with KPR” 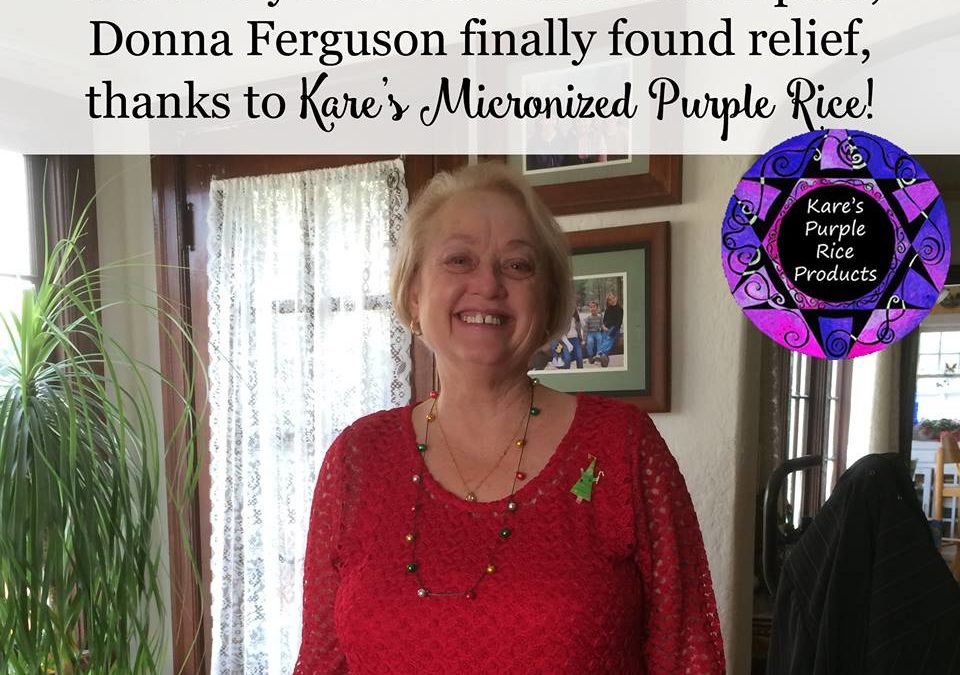 What’s more, it may have even saved her life after she got a deadly bacterial infection.

Several years ago Donna’s sister was in the hospital, fighting for her life.

“My sister was really sick and was in and out of the hospital for six months,” says Donna. “In fact, I had to move her things out of her house. We didn’t know at the time that she had a contagious bacterial infection, and so the hospital workers didn’t take precautions when we’d go to visit. About halfway through her illness, they started having us wear masks, gowns, and gloves when we’d go see her – but it was too late. It had already gotten me.”

The doctors put Donna on a potent cocktail of 3 strong antibiotics for six weeks, two different times, but it wasn’t enough. The bacteria were still there in her stomach. She suffered from diarrhea and constant pain as a result.

What’s more, she had already been suffering for years from GERD (acid reflux).

“I had been sick with indigestion for 20 years,” Donna explains. “At first you take Tums, and then you take other antacids or anything you can get your hands on. Eventually you go to the doctor and start taking medicine.”

Her acid reflux was really taking its toll. “Eventually I couldn’t eat anything at all after about 2 o’clock in the afternoon. I’d get such bad indigestion at night while I was sleeping that it would come up into my throat, and sometimes a little would go into my lungs. It was unbelievably horrible – I was really feeling like I could die.”

Donna also had high cholesterol, and that was what led her to Kare’s Micronized Purple Rice. She learned how it is milled so fine that its powerful nutrients are able to be absorbed through the cell membrane, fuel the mitochondria (the cellular battery), and regenerate the cells. She started taking it in June of this year.

“I was looking for something natural to help with my cholesterol and triglycerides. Well, needless to say I was thrilled when my triglycerides came down 85 points in a little over 3 months!”

The Micronized Purple Rice is helping Donna in many ways, including clearing up her psoriasis, foot pain, and back pain, and lowering her A1C.

“It has helped with my energy, and recently, within the last two weeks, I have noticed a lot more clarity. It has given me the energy to start doing projects that I had put aside for a long time. I’m just feeling better!”

Donna is not only feeling better, but looking better as well! “My facial skin is much improved,” she says. “I went with my sister to visit some of her friends, and this lady looks at my face and she goes, ‘My God, you have beautiful skin!’

I’ve seen a difference in my eyelashes, too. They’ve gotten darker, thicker, and more curly!”

And her stomach started feeling a lot better. “After about seven weeks on the Purple Rice, I was able to eat past 7 o’clock at night without any problems!”

Regarding her stomach infection, after the 2 six-week sessions of strong antibiotics didn’t work, the doctors had told her she could have even stronger antibiotics, “but that would leave me without any protection and I could possibly die if I caught the wrong bug.”

“My only hope was the Purple Rice,” Donna says. “Then I got my test back – Yesiree! It came back negative. I am so excited and over the moon. My prayer is for everyone to receive the blessing of this powerful food.”

To learn more about the Micronized Purple Rice, check out my website here: www.karespurplericeproducts.com/purple-rice