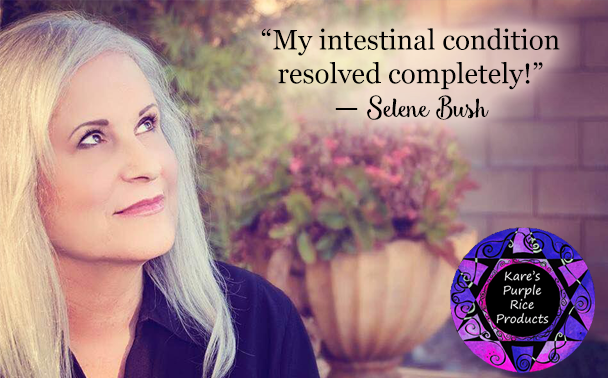 TESTIMONIAL TUESDAY: Selene Bush of California says she started on Kare’s Micronized Purple Rice (MPR) powder 10 months ago to improve her blood readings, and it helped, but she was thrilled when it also helped resolve her intestinal condition as well!

“I started on MPR because I wanted to improve my blood readings,” Selene says, “and, because it’s a natural food, I was also hoping it would nourish the rest of my body.”

“After three months, I had my blood tested, and the doctor said my readings had improved. I was very happy about that, but even happier when my intestinal issues resolved!”

“My condition involves inflamed pouches in the colon wall,” she explains. “I’ve had it for a while, and I’ve had some really bad episodes.My flare ups for my intestinal were about every 3 months for a couple of years, with pain always there. I had to go on strong antibiotics three times in four months, and I was dreading the thought of needing surgery.”

“Thanks to MPR, though, I don’t have episodes anymore,” she says. “It’s pretty incredible! So it did things I wasn’t expecting. I got started on MPR for my blood levels, and it ended up helping with my intestinal condition, too.”

SHE STARTED ON MPR 10 MONTHS AGO

Selene has been using Micronized Purple Rice powder for about 10 months now, she says.

“I read a Facebook ad and thought I should try it,” she relates. “I was told by my doctor that I needed to go on cholesterol medication, which I did not want to do.”

“I don’t take any prescription meds at all,” she adds, “and I’d like to keep it that way. So I thought I’d give MPR a try. I’m sure glad I did!”

Selene learned how this powerful food can fuel the body, giving it more energy to repair and regenerate, and that it takes 60 pounds of rare, heirloom purple rice from Thailand to make just one pound of powerful MPR powder.

“I’m pretty open about alternative health products,” she says. “I’ve tried a lot of supplements for various ailments in the past but haven’t felt anything with them. MPR has been very different in that regard.”

FIRST THING SHE NOTICED WAS HER HERNIA IMPROVING

“The first thing I felt was a difference in my hernia,” Selene says. “It’s like when you’ve eaten something heavy, and you feel it sitting in your stomach. It’s painful, and you feel nauseated.”

“Well, the nausea went away,” she says, “and I hadn’t changed my diet at all. After a while I was not having anymore symptoms, so that was a really big deal for me!”

“Also, I eat a pretty healthy diet overall,” she relates, “but I was having sugar cravings before I started on MPR.”

“Well, the next thing I noticed after my hernia improved was that my sugar cravings went away,” Selene says. “Caffeine, too. I wasn’t a big coffee drinker before, but now I don’t crave it at all!”

HER JOINT PAIN IMPROVES, TOO

“I had joint pain in my toes and hands,” Selene says, “and I was using vitamins to help with that. Well, I ran out of the vitamins about four months into MPR.”

“I didn’t order anymore vitamins,” she adds, “but the joint pain in my foot and hands stayed gone. It has never come back, even after six months. So I was pretty thrilled with that!”

“All in all,” Selene concludes, “I’ve been really happy with Micronized Purple Rice powder. I started on it to help with one thing, but it has helped me in so many other ways as well. I’m sticking with it!”