“We can travel again.” 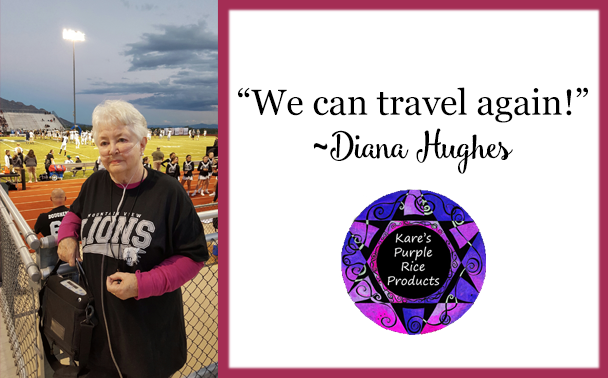 After a triple bypass in 2014, Diana Hughes, 75, of Ohio discovered she has an incurable lung disease. But with help from Kare’s Micronized Purple Rice (MPR) powder, Diana’s feeling so much better that she and her husband are now on their second road trip across the U.S.!

“I have a chronic lung disease,” Diana explains, “involving buildup of scar tissue between the air sacs, which become stiff and thick. This makes it difficult to breathe, resulting in less oxygen in the bloodstream.”

“I’m on oxygen 24/7 and have been ever since I got my diagnosis,” Diana says. “Before that, my oxygen level was dropping so low that I would almost pass out.”

“But I try to stay positive,” she adds, “and I have a higher power helping me every step of the way.”

“I began researching my condition,” Diana says, “and what I learned was not good. That was in October 2014.”

“Then, the following summer, in August 2015, I discovered Kare’s Micronized Purple Rice powder,” Diana says. “I started reading about MPR and watched Kare’s videos and read the testimonials.”

Diana learned how this powerful food can fuel the body, giving it more energy to repair and regenerate, and that it takes 60 pounds of rare, heirloom purple rice from Thailand to make just one pound of powerful MPR powder.

The most nutritious part of the purple rice grains is extracted and milled so fine that its concentrated nutrients can fuel our mitochondria (cellular batteries), which then produce ATP, or pure light energy.

“I decided to give it three months and see what would happen,” Diana says. “Now, over a year later, I’m still on it, and I would never be without it!”

“With my condition, you’re extremely tired all the time,” Diana says. “I was so tired I could hardly move. You know the way runners look at the end of a marathon? Well, that’s how it was for me after walking less than a block, and having to stop many times.”

“For me, the first thing I noticed from MPR was increased energy,” she says. “I don’t have a ton of energy like some people get, but I feel a lot better than many people with this condition. My energy has increased, and I can walk for half an hour a day on the treadmill now, or around the neighborhood. I couldn’t do that before.”

“I have a big oxygen concentrator at home,” she says, “and it has a 50-foot cord so I can walk throughout the house. I also have a portable concentrator for when I’m out. It weighs 5 to 10 pounds.”

“If I’m exercising at the gym, I have my portable concentrator on the floor next to me. I can’t carry it very far, though, so if I’m walking, my wonderful husband carries it for me. He’s the greatest caregiver in the world!”

“In October 2015, after I’d been on MPR for three months, I went to my doctor for a checkup including a blood draw,” Diana says.

“I was amazed at how improved my circulatory system was.”

“Like lots of people my age,” Diana says, “my eyesight had been changing for years. Well, I returned from my yearly appointment with my ophthalmologist with great news to share. I could read two lines lower on the eye chart than I did the previous year!”

“When I first started on MPR,” Diana says, “my skin had some problems. After three months, it had improved and evened out.”

“My skin’s softness has improved, too — people have been telling me they notice a difference.”

“Another thing I noticed was that before, I had perfectly white hair except for one small spot of gray,” she says.

“But now I have a little bit of gray all over — enough to know something’s happening inside, in my cells.”

“My husband and I had been talking for a long time about going on a road trip,” Diana says, “and with my diagnosis, we decided we’d better do it while we still could.”

“I wasn’t really sure I was up to it,” she says, “but I had started on MPR powder in August 2015, and I was already feeling much better by October.”

“Also, I met a gentleman in my support group who’d gone on a month-long trip. He told me, ‘If it’s something you want to do, just do it. There are ways to deal with your condition along the way.’ He gave me some great tips.”

“My doctor also encouraged me to go,” Diana adds. “He told me, ‘Don’t just sit down and die. Get up and move, and do what you want to do.’ So my husband and I decided to go on this journey.”

“We traveled from Ohio to Branson, Missouri, and stopped to see friends along the way,” Diana says. “We toured the southwest then spent the winter in California. From there we went to Tucson and San Antonio, then Florida, and up to Virginia.”

“We traveled coast to coast in five months and one week, and we had the most wonderful trip ever. There was only one minor disappointment — we had to skip the south rim of the Grand Canyon because of the altitude. My husband and I both have blood pressure issues, so we have to be careful with high altitudes.”

“It was the trip of a lifetime for us,” she says. “If it hadn’t been for the gentleman in my support group, and my increased energy from the purple rice, I don’t think we would have ever tackled it.”

“In fact last year’s trip was so great that we’re on the road again right now!” Diana beams. “This time we’ll be gone for eight months. We drove to Atlanta then flew to California. Then we drove to Tucson, where this picture was taken at my nephew’s game. He’s a star player for his high school football team.”

“It’s really pretty amazing that I could make a trip like this,” Diana concludes, “but I’ve had a lot of wonderful caregiving from my loving husband and encouragement from friends and family. I’m doing it, and I couldn’t be happier!”