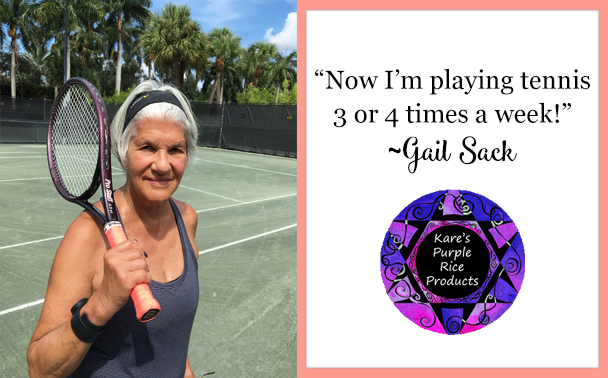 Gail Sack, an early 70-something tennis enthusiast from Florida, loves what Kare’s Micronized Purple Rice (MPR) powder has done for her health and that of her dogs!

Gail is an energy therapy practitioner who works in many modalities, she says, including shamanism, craniosacral work, and body/spirit/mind teaching.

“I also do fundraising for charities and synagogue,” she adds, “taking food and medicine to people all over the world. I love helping people!”

PLAYING TENNIS 3 OR 4 TIMES A WEEK

“I hadn’t played tennis for three years,” Gail relates, “but now I’m playing three or four times a week and can keep up with the best. I have energy like you can’t imagine!”

“Recently I had a fall while playing,” she says, “and I banged up my knees. I’d heard MPR works well as a paste for things like cuts and burns, but I didn’t know if it would work for deeper things like bruised muscles or joints.”

“Well, I tried putting some on damp paper towels and holding it against my injured knees, and it really helped. The swelling came down, and the pain lifted. After a week or so, I was ready to go out and play tennis again!”

STARTED ON MPR IN MAY

“I first found out about Kare’s Micronized Purple Rice powder on Facebook,” Gail relates. “I was skeptical at first, though, so I hung out in her Facebook group for about a month and a half, reading the comments and testimonials and asking questions.”

“I wanted focus and improved health,” Gail says. “That’s what made me decide to call Kare. I’m sure glad I did, too! Kare explained so many things to me that night on the phone, and it all made so much sense.”

Gail learned how this powerful food can fuel the body, giving it more energy to repair and regenerate, and that it takes 60 pounds of rare, heirloom purple rice from Thailand to make just one pound of powerful MPR powder.

“I want to live into my nineties or longer,” Gail says. “Longevity runs in my family — my grandfather lived to 104 — but you can’t just count on genetics; you have to really take care of yourself, too.”

“I’ve had celiac disease for 15 years,” she relates, “so I have to be very careful with grains. For years they told me it was IBS, but then I was tested and it turned out to be celiac. I have to be especially careful if I eat out. But I’ve noticed that now, if I do accidentally eat a little wheat, the effect is not nearly as severe.”

“I’m also borderline diabetic,” Gail says. “I used to get tired in the afternoon, like a sugar thing. But now I don’t need my 3 o’clock coffee anymore! I figure it has to be the MPR.”

“I’m sleeping longer now, too,” she adds, “and I don’t have any trouble falling back to sleep after I get up to go to the bathroom.”

A BIT OF DETOX IN THE BEGINNING

“I did have a bit of mild detox the first couple weeks,” Gail relates, “but after that I felt much better. People panic when they think of detoxing, but it’s natural, and just part of the process. We have to be patient — this takes time. I tell people not to expect overnight results.”

“Some people don’t even notice the gentle cleansing going on in their bodies as they start the healing process,” she adds. “Often we expect quick results — but things just don’t happen that way. If you want to improve your health for the rest of your life, then give your body the time it needs to get healthy.”

“When I first got my MPR, it sat on the shelf for two weeks,” Gail admits. “I just stared at it, wondering if I had done the right thing. I’ve been scammed in the past, so I was a little unsure how it would go. But this is definitely not a scam.”

“At first it seemed expensive,” she says, “but I added up all the other things I was taking before, and it came to more than the cost of my MPR.”

“My health is vitally important to me,” she adds, “so this is worth the cost. I used to take a lot of supplements, but since starting on MPR, I’ve cut way back. I just don’t seem to need them anymore.”

PAIN IMPROVES IN MANY AREAS

“I’ve had major sinus problems for quite a while,” Gail says, “but since starting on MPR, my sinus pain has cleared up. Gone!”

“I also had a dental implant put in long ago,” she relates, “and they hit a nerve. Ever since then I’ve had pain and numbness in my lip and cheek. I’ve been to numerous doctors and dentists about it, and they all said there was nothing they could do. So I’ve had to live with it for 20 years. But after only about three weeks on MPR, the pain and numbness disappeared!”

Gail was also bothered by a bit of sciatica pain, she says, “but it’s gone now too. I woke up one day and realized I didn’t have any pains at all! I have to give the credit to MPR — I haven’t done anything else.”

As an energy worker, Gail says, “I work on the muscles and nerves, so I’m familiar with how the nervous system works. I’m convinced that MPR affects our nervous system in a positive manner.”

“I also had the beginning of cataracts,” she says. “I wear trifocals, but lately I’ve noticed I don’t really need my glasses anymore. I’m going to have my vision checked soon, but I do know it has improved — it’s a major difference.”

“People have been complimenting me on my hair and skin,” she adds. “I have very thick white hair, and I get it straightened. My beautician gives me keratin treatments every six to eight weeks, and the last time I saw her she told me I wouldn’t need one for three or four more weeks! My skin is much softer now, too.”

HER STANDARD POODLES DEMAND THEIR MPR AS WELL! “I started my two black standard poodles, Molly, 13, and Katie, 9, on it about a month ago,” Gail relates. “Well, now they won’t touch their organic food unless it has MPR on it! They’ll stand by their bowls, just looking at me, until I sprinkle MPR on their food. It’s so funny to watch.”

“They both have a lot more energy now, especially Katie,” she adds. “They’ll run clear around the block! They smile a lot now too — they just seem to feel much better.”

“And in fact, I’m feeling much better myself!” Gail concludes. “I believe the longer I use MPR, the healthier I’ll be. I use it three times a day, and I plan to keep doing so for life.”