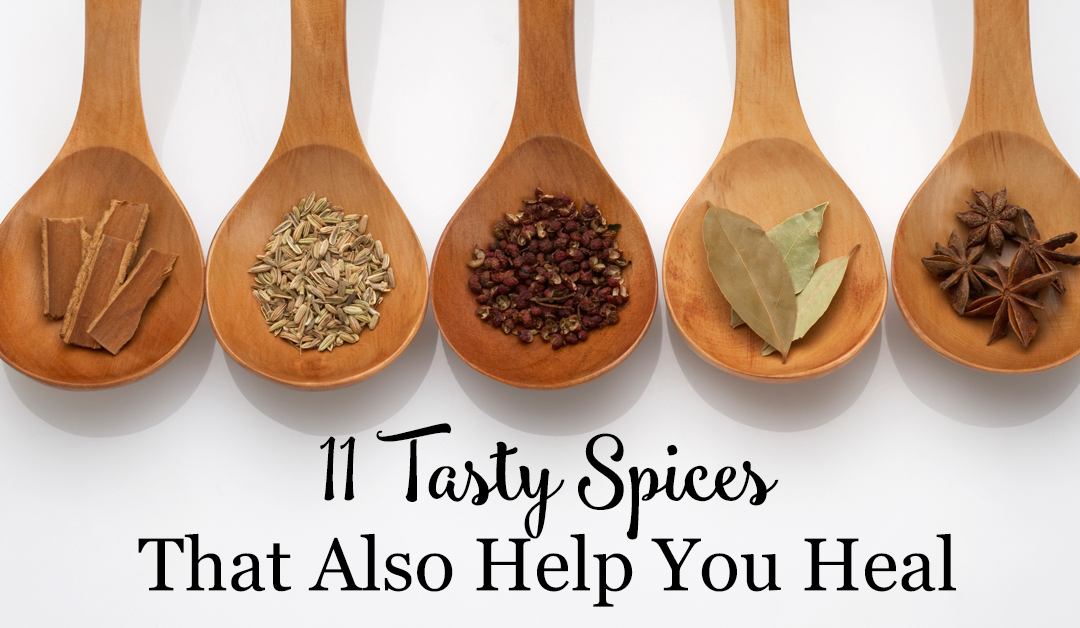 We’ve all heard a lot about superfoods, right?

The most powerful superfood of all, of course, is my Micronized Purple Rice powder! With all its polysaccharides, polypeptides, and anthocyanins, it is truly a superfood for all.

But what about the spices and herbs we cook with? Even though the amount we put into foods is generally small, these potent plant substances are so powerful that they provide a lot of great health benefits.

Spices and herbs can help with everything from weight loss to diabetes and heart disease — and some can even help fight cancer.

This week I’m covering spices, and next week I’ll discuss culinary herbs. The difference is that spices come from roots, seeds, and bark, whereas herbs come from a plant’s leaves.

Spices also generally come from tropical climates, whereas herbs hail from temperate areas of the world.

I already discussed turmeric in a recent blog post, so I won’t be covering it here, but there are many other healthful spices to consider.

With their strong antifungal and anti-yeast properties, caraway seeds can be simmered with milk and honey for use as a natural remedy for colic in babies.

The essential oil of caraway seeds has been used medicinally for centuries. It is a powerful disinfectant and antiseptic.

Used with honey, this potent oil is known for helping increase milk production in lactating mothers, with a side benefit that the baby will have less gas and indigestion.

Whole caraway seeds are known for flavoring rye bread, but they have other uses as well. I like to toss them in with steamed broccoli to add flavor. It’s great on roasted veggies as well. This pungent Asian spice is a potent antioxidant that has many health benefits. Known as the Queen of Spices, cardamom is the third most expensive spice, after saffron and vanilla. And like its relative, ginger, cardamom is very helpful with digestive issues.

This spicy red pepper contains capsaicin, which helps with weight loss by reducing appetite and increasing fat burning. It also may have anti-cancer properties (especially for skin and colon cancer) and helps boost immune function.

Cayenne also has a detoxifying effect, helping to rid the body of harmful fungi and other microbes. It’s part of the lemon cleanse that’s been so popular in the last few years.

Capsaicin, which is contained in many different pepper varieties, is also known for helping prevent LDL cholesterol from clogging arteries and may also help to prevent ulcers.

Even milder red peppers like paprika have many of the same benefits, so if you feel cayenne is too spicy, you can still reap the benefits of capsaicin by using paprika. This beloved favorite has many health benefits, but is probably best known for its ability to lower blood sugar and improve insulin sensitivity. In addition, it helps to lower LDL and triglycerides, and helps boost metabolism.

Cinnamon also has antiseptic properties, helping to cleanse the body of harmful microbes while leaving the helpful ones alone.

I like to add cinnamon to my smoothies and sprinkle it liberally on oatmeal or yogurt. It also makes an excellent finishing touch for coffee or hot chocolate. One other yummy favorite, especially with fall approaching, is to add it to hot cider. Cinnamon sticks work best for that.

You can even add cinnamon to savory dishes such as soup or chili!

You may think of cloves as the spiky brown things poked into ham, but they actually have many health benefits.

Ground up, they have antibacterial, antifungal, antiviral, and antiseptic properties. They also help relieve flatulence and help promote good digestion. You can add them to your hot cider as well.

Often used in chili and other Tex-Mex dishes, cumin can be used either powdered or as whole seeds. It is also used, along with turmeric and other spices, in curry powder.

Cumin helps with digestion as well as improving immunity. This nutty, peppery spice may even have anti-cancer benefits, especially for stomach or liver tumors.

Thought to increase libido and masculine vitality, fenugreek was grown in Charlemagne’s imperial garden, possibly because it helps to increase testosterone. This aromatic herb was used by the ancient Egyptians as well.

This rather unusual spice is often included in Indian dishes, such as curries. But in addition to adding flavor, it’s known for stimulating appetite, which can help people with anorexia. This spicy yellowish root has many, many health benefits. I love to include it in my juicing because of its cleansing effect. It’s known for helping alleviate colds and stomach discomfort, including nausea, heartburn, and bloating.

It also has a potent anti-inflammatory effect and may help fight colon cancer. Ginger can help with pain management, too, especially for osteoarthritis.

These tiny yet powerful seeds help to reduce the severity of asthma and may protect against cancers of the gastrointestinal tract. They’re an excellent source of selenium, a known cancer fighter which also helps with asthma. They contain a fair amount of magnesium as well.

And, they’re a good source of omega-3 fatty acids, which are an important component of an anti-inflammation diet.

Known for its use in pumpkin pie and other baked goods, nutmeg has many health benefits.

One of its key attributes is its helpfulness in detoxifying the body. It helps the liver and kidneys to expel toxins and impurities.

Nutmeg is also helpful as a sleep remedy, and it soothes digestion as well.

The most expensive spice, saffron’s delicate orange tendrils have long been used in Persian cuisine. It is also what makes oh-so-tasty Spanish paella yellow.

But saffron is more than a flavor and color enhancer. This golden spice acts to lift mood, and may help relieve PMS and depression as well.

And that’s it for healthful spices! Be sure to stay tuned for next week’s blog topic, healthful culinary herbs.

What’s your favorite spice? How do you like to use it? Please let me know in the comments below.